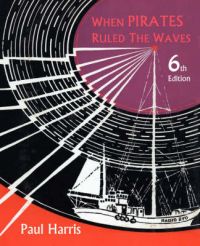 When Pirates Ruled the Waves

ISBN: 9781904999379    Publisher: Zeticula Year of publishing: 2001     Format:  Paperback No of Pages: 384
Intrigues, threats, boarding parties, smuggling, shipwreck, danger and adventure on the high seas - they all form part of the remarkable story of the pop radio pirates. During the 1960s and '70s, they...Read more
Intrigues, threats, boarding parties, smuggling, shipwreck, danger and adventure on the high seas - they all form part of the remarkable story of the pop radio pirates. During the 1960s and '70s, they broadcast their programmes from storm-lashed radio ships anchored off the coasts of Europe. As the popularity of the stations grew - first in Denmark and Sweden and, later, in Britain, Holland and Belgium - and they multiplied in number, competition among them reached cut-throat level. The story is told of how the dramatic events around the Radio City fort in London's Thames Estuary resulted in the shooting to death of its owner; of the rivalry between Holland's Radio Veronica and the sychedelically-painted Radio North Sea International which culminated in the night bombing of theNorth Sea ship; how Radio Caroline, Capital Radio and Radio Veronica broke free from their stormy anchorages and were driven aground; how Radio North Sea International became the centre of an espionage scandal involving the security services of several NATO countries, and played its part in influencing the 1970 British General Election.
Blackmail and armed boarding parties were the order of the day as rival gangs of pirates literally fought to take over each other's radio ships and to carve up lucrative advertising markets. Successively, the governments of Denmark, Sweden, Belgium, Britain and The Netherlands legislated against the pirate broadcasters. On the positive side, the activities of the pop radio pirates led to innovations and improvements in the established government monopoly radio services. Pirate disc jockeys, crewmen and radio engineers were pursued by police throughout Western Europe and many prosecuted for daring to provide their diet of relentless pop music from a wallowing, rusty radio ship bearing a huge aerial mast. They were, perhaps, the last real romantic outlaws in a world which has little time for those who seek to operate outwith the reach of the all-embracing tentacles of government. This edition - incorporating much of the text of Paul Harris's first work, When Pirates Ruled the Waves, a bestseller on publication in 1968, which subsequently ran to four editions - has a new preface by the author.
It is illustrated throughout with over 100 photographs of the radio ships and the personalities associated with them. Paul Harris has worked variously, since his days in pirate radio in the late '60s and early '70s, as a writer (more than forty books), publisher, international printing consultant and journalist. He covered the wars in Yugoslavia 1991-5 for press, radio and TV and, for ten years, worked as an analyst on global insurgency and terrorism for Janes Intelligence Review. His work took him to Sri Lanka, where he was also Colombo correspondent for The Daily Telegraph, and to such exotic hotspots as Nepal, Assam, Manipur, Meghalayah, Aceh, East Timor, Uganda, Eritrea, Sudan, Nagorno Karabakh, The Saharawi Arab Democratic Republic and to China, where he worked on The Shanghai Daily newspaper. He is now endeavouring to live a quiet life in a small, remote country marked by hot weather and a lack of insurrection or drama. He works as a lecturer on cruise ships in Asia and Europe. His most recent book is Delightfully Imperfect: A Year in Sri Lanka at the Galle Face Hotel, also published by Kennedy & Boyd.
Read less

Other books by Paul Harris

The History of the Royal...