Track Order Your Cart
Buy Books Online > Biography: sport > When the Tuna Went Down to Texas: The Story of Bill Parcells and the Dallas Cowboys 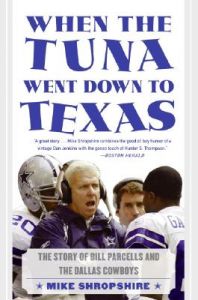 When the Tuna Went Down to Texas: The Story of Bill Parcells and the Dallas Cowboys

Bill Parcells was living in self-imposed exile from the National Football League sidelines. The Tuna had earned living-legend status after coaching the Giants, Patriots, and Jets from the skid-row district...Read more

Bill Parcells was living in self-imposed exile from the National Football League sidelines. The Tuna had earned living-legend status after coaching the Giants, Patriots, and Jets from the skid-row district of the NFL and transforming those teams into champions. The final weeks of the 2002 season found Parcells working as an analyst at the ESPN studios. His heart aching, Parcells was like a televangelist with no cripples to heal. The Tuna urgently yearned for another lost cause.

In Dallas, Cowboys' owner Jerry Jones--described by author Mike Shropshire as "a man involved in a heroic struggle to overcome what had been diagnosed as a terminal face-lift"--was suffering through sleepless nights. Although his once-proud pro football powerhouse traveled beneath a banner that read "America's Team," it had suffered three straight 5-11 seasons. This team was so sick, it had bedsores.

After a clandestine meeting aboard Jones's private jet, parked at a New Jersey airport, Parcells agreed to abandon his East Coast roots and travel south to restore life to the Cowboys. The Tuna and Jones needed each other in the worst kind of way, so a shotgun wedding was performed. The pundits of the national media joined hands and shouted, "Parcells and Jones can't stand each other! They're too set in their ways! It'll never work!"

As usual, the pundits were wrong. With Parcells the ultimate motivator and so-called Jock Whisperer applying his craft, Dallas rolled to a 10-6 regular-season record and shocked the NFL by making the playoffs. When the Tuna Went Down to Texas details the saga of how this unlikely partnership of men "too brittle for tango lessons, but not yet blind enough for assisted living" amazed the sports world and serves as absolute proof that while the truth is not always stranger than fiction, it's usually a lot funnier.
Read less

Other books by Mike Shropshire

Sarah Palin and the Wasilla...

Ronaldo: The Obsession For...